Distance from the centre: 5,3 km 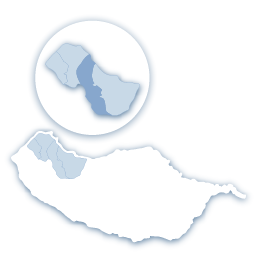 The most extensive and abundant watercourse formed in the interior of the island between mountains flowing into the ocean, is called Ribeira da Janela. This name comes from a small islet that rises near the mouth of the stream, which has a natural crevice at the very top that resembles a window.

Initially, the parish was called Janela da Clara. There are a few Islets not too far from the coast, with one of them originating the present name.

The soil in Ribeira da Janela is extremely fertile and is the origin of most of the produce in Madeira. Irrigation is done via Levada do Lombo Gordo and Levada dos Cedros.

In the mountains of this parish lies the astonishing Fanal, famous for its stunning lagoon, dense trees and breath-taking scenery set in the heart of the Laurissilva forest. 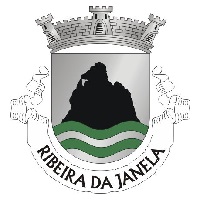 Silver background with a black rock with a small crevice.

Three silver towers crown the top and a white banner with "Ribeira da Janela" in black at the bottom.

Heritage and points of interest

Lagoa do Fanal (crater of a volcano)

Partof the stream that connects Paul da Serra with the Hydroelectric Power Station.